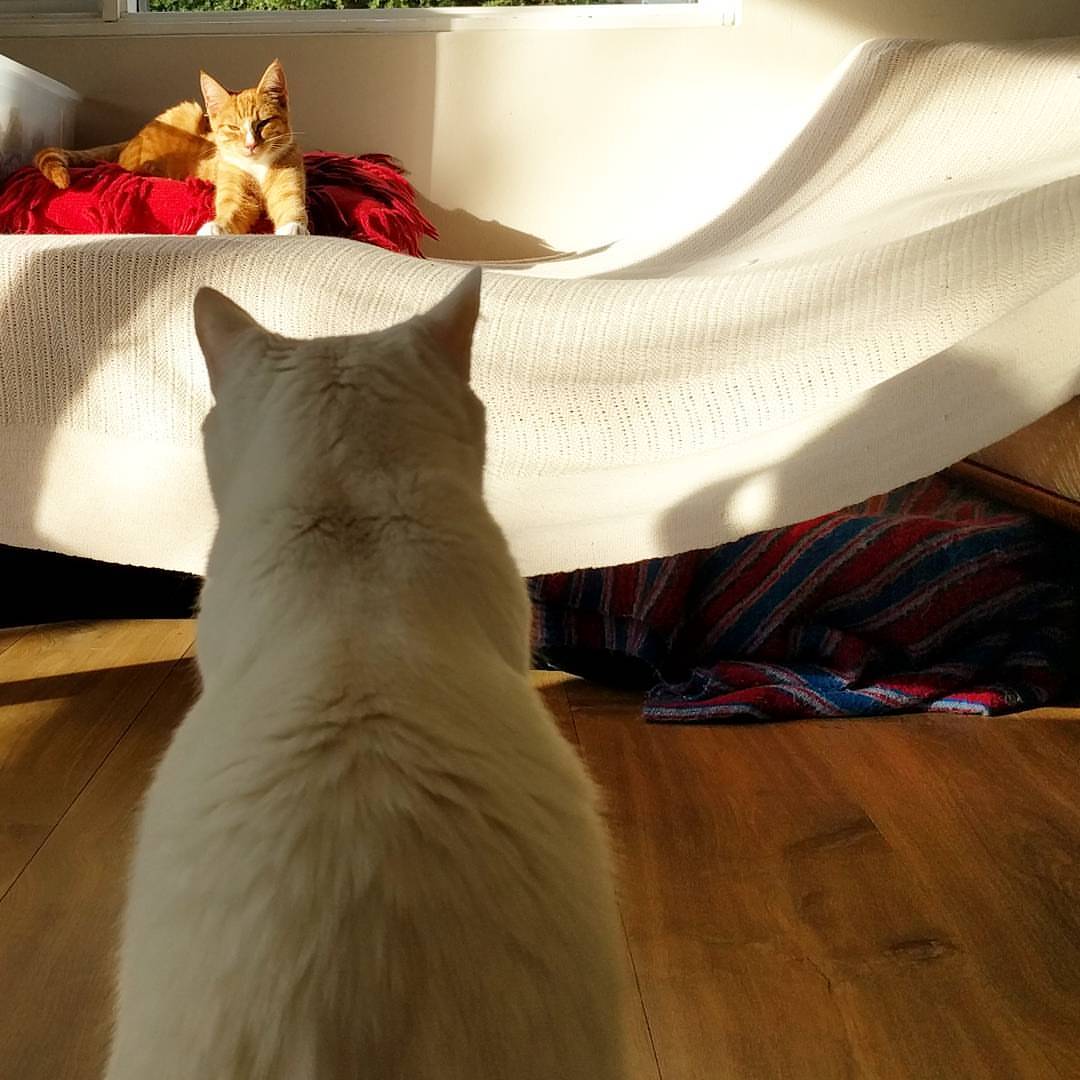 I have not yet written about our experience introducing Sasha to our newest family member, little Piper. It was HARD WORK, I am not going to lie and it took a long time. People cannot believe that my white princess has somehow accepted her new ginger sister, but we certainly did not rush things, and it did take us some work. I hope this post might help you socialising two cats, or even a cat with a dog.  My big tip is GO SLOW, and repeat a previous step if needed. For those of you who do not know Sasha, (the white one), she is a strange rescue cat who hides from the vacuum cleaner and hisses at delivery men. (I’m basically dealing with a feline psychopath.) But she is very social, with us. She would sing the song of her people at 5am in the morning, meowing for playtime and walks, ALL THE TIME, and generally give us the shits. We thought boredom would be it, and so… this happened… 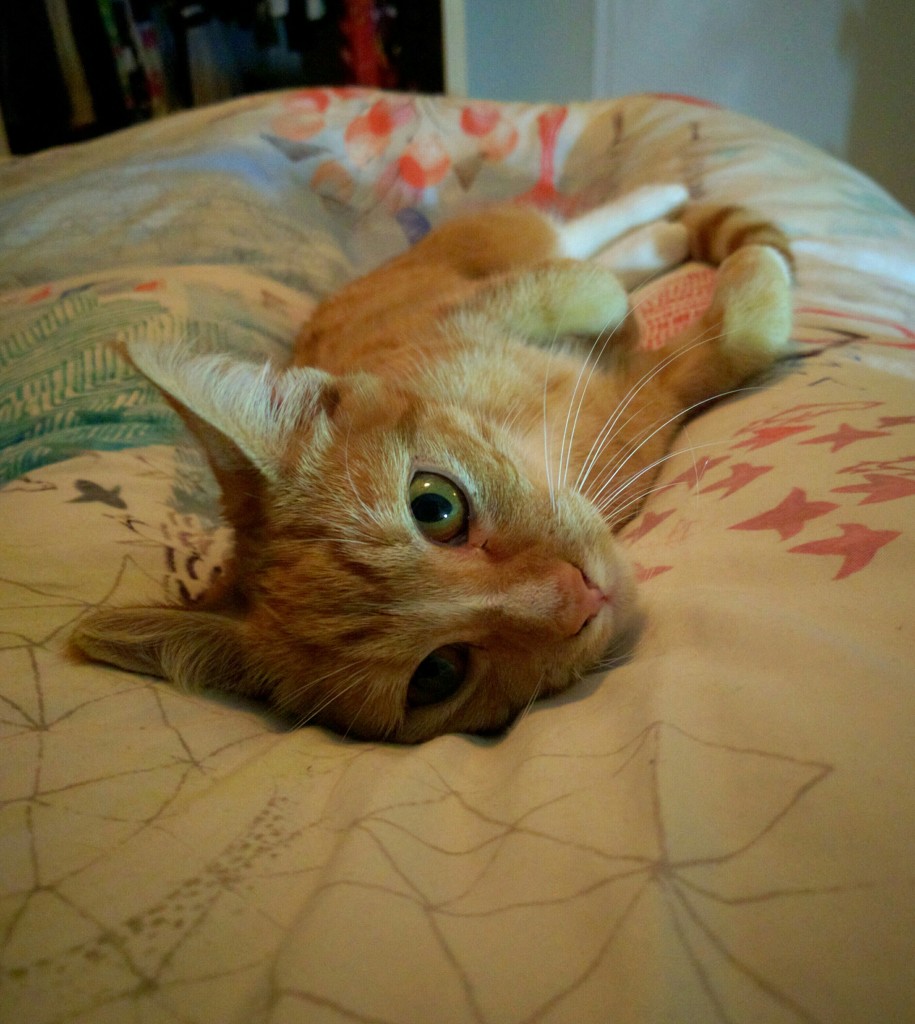 Without much planning, The Ginger Hunk fell in love with this little girl at the RSPCA, and so we brought her home. (Apparently we would have had better luck putting a male cat with Sasha, but it was too late to intervene, The Ginger Hunk had fallen, deep and hard.)

After watching Jackson Galaxy videos, we put the kitten in one room, and let the main cat have the run of the house. This is what we did for the first day. Piper was happy exploring the new world of The Ginger Hunk’s office, and Sasha was happy knowing that whatever was in there, couldn’t get her. We set up each cat with their own stuff, food, litter and bedding and keep them separated, while giving them both attention.

This part of the phase involved swapping smells only, and it was HARD. We kept the cats separated and swapped their rooms, bedding and smells. The Ginger Hunk’s office was Pipers “bedroom” but when she went to sleep for example in our bedroom, we would leave the door open so Sasha could go in and out of the office. At this stage Sasha was one territorial kitty and would even hiss when she smelt Piper. We would add in cat treats when Sasha went into Piper’s room, so she could learn the smell was associated with good things. Feliway, a cat diffuser, helped us a lot in this stage (and still does!) 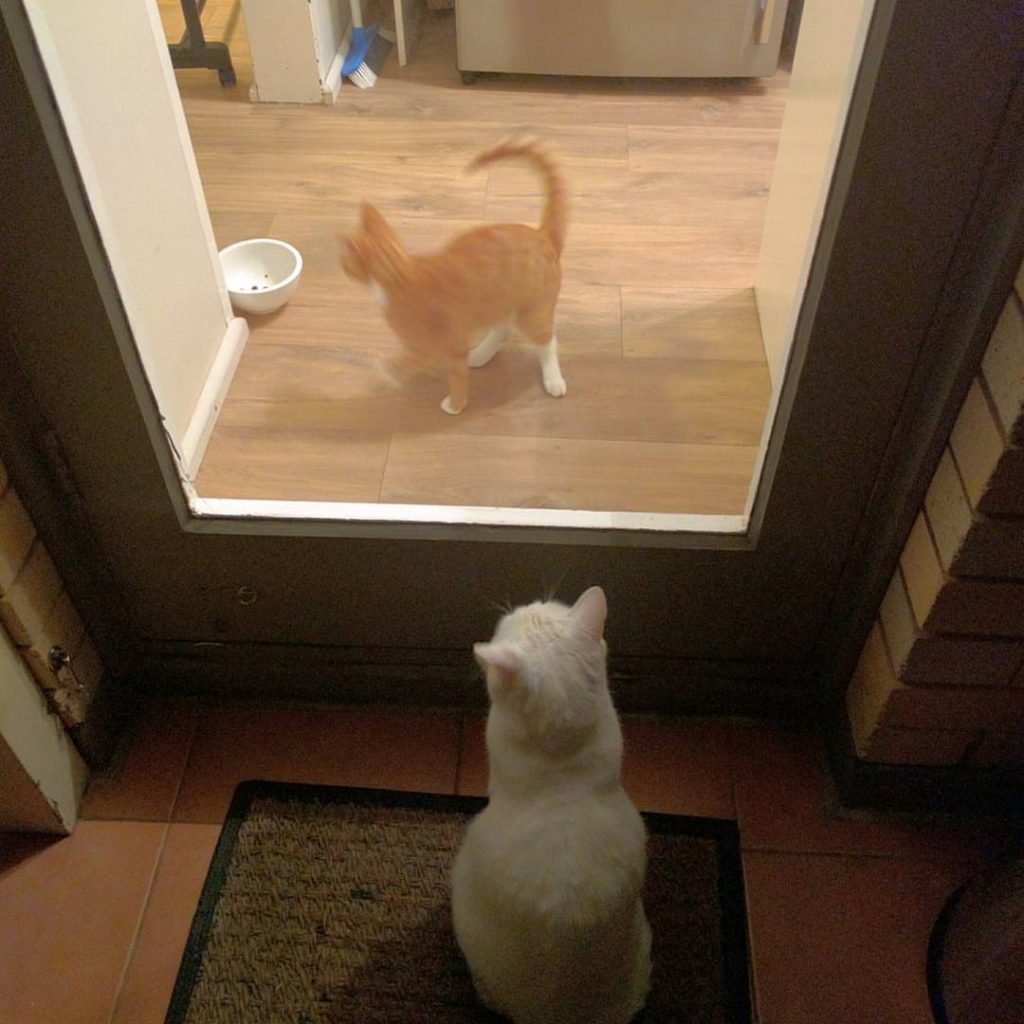 This is the stage when you’re meant to let them see each other, but don’t let them out with each other, until there are no signs of aggression. During this stage, we tried to keep Sasha’s routine fairly normal. If she was out on the balcony, then we would let Piper run about the house and she could watch behind the glass. If The Ginger Hunk was in his office with Piper, then they wedged the door ajar a little and the cats could swipe and hiss at each other through the door. Don’t be afraid to let them meow, hiss and cuss at each other, they are just working out who is the boss. You only need to separate them if one cat is going absolutely bat shit crazy.

By this time we were well and truly OVER keeping the cats separated. They were desperate to be out and about with each other. Sasha would be meowing when Piper was in a room and vice versa. (Don’t be fooled this was out of curiosity rather than friendship.) So one evening, we opened all the doors, sat down with a bottle of wine, and let the cat show run. There was lots of chasing, galloping, hissing and running very fast from one room to another. At one point they sat opposite each other, and Piper flopped on the floor in front of Sasha, deciding to submit. Sasha looked at her, meowed and rolled over on her back as well. It was then we knew that this Lion sign meant that they were signalling to each other that they were not a threat. We stayed in this phase for a few days before we let them both around all the time. 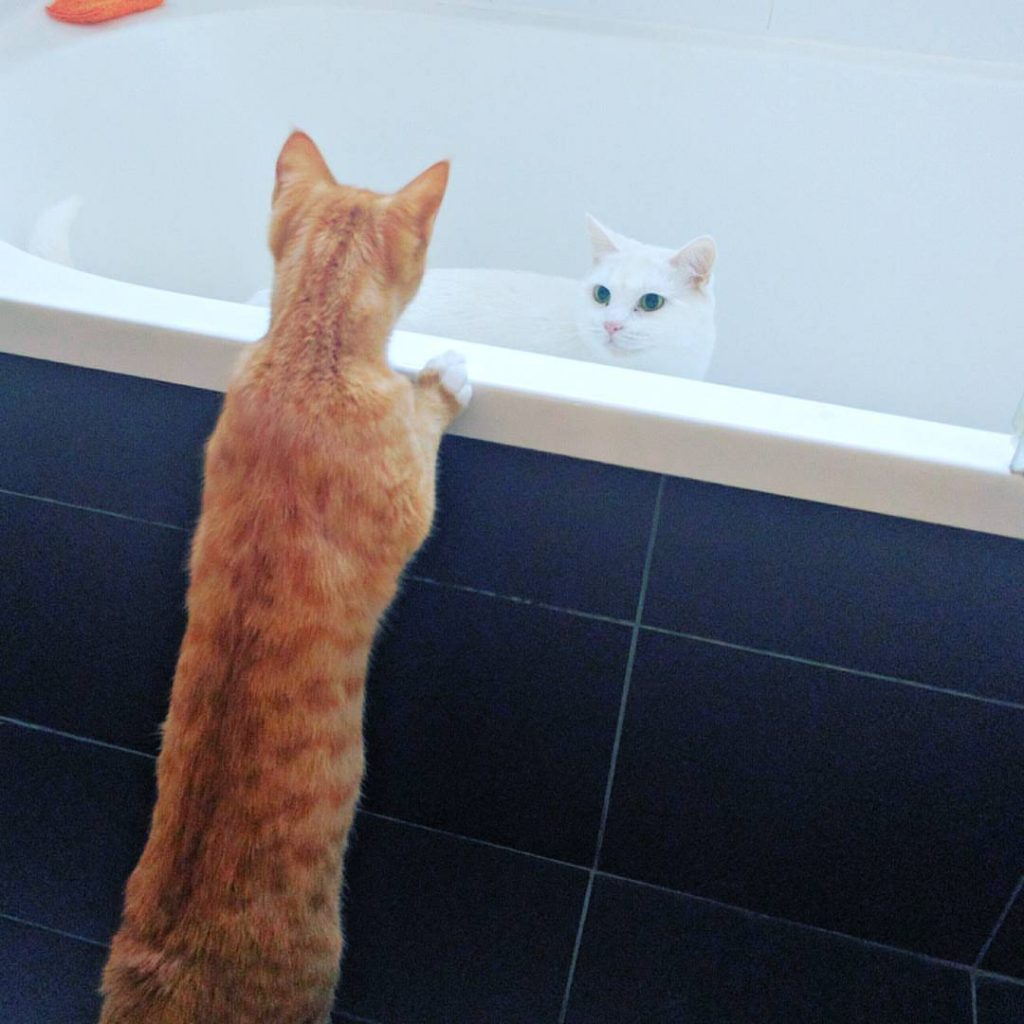 I believe what we have grown is a relationship of tolerance rather than love. I’m sure Piper loves Sasha, but Sasha I think tolerates her (but maybe secretly loves her a little.) They play hide and seek with each other in the mornings, and retire to the bedroom together during the day before uniting forces to hunt bugs on the balcony at night. My Sasha will never be a snuggled (even with us), so they don’t yet groom each other.  There is the occasional hiss around food times and when we both get home, (it’s a jealously thing.)Being three years older than Piper, sometimes poor Sasha looks so EXHAUSTED, like Piper has worn her out. At these times, we put Sasha in the bedroom for some R & R.

But really, it has worked out better than I ever imagined, for us all and our girls.

Have you socialised any animals?

Have I missed any tips? 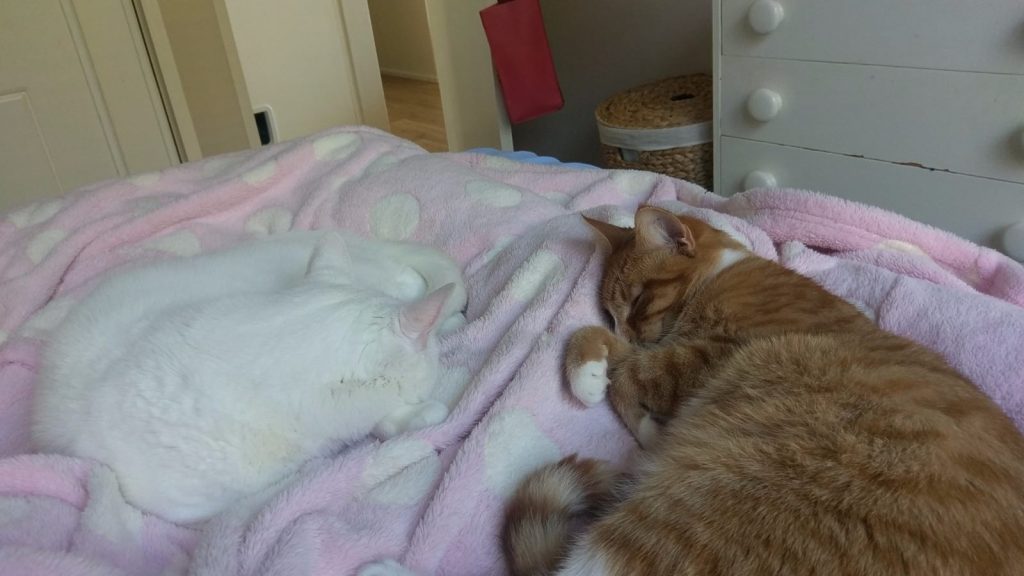 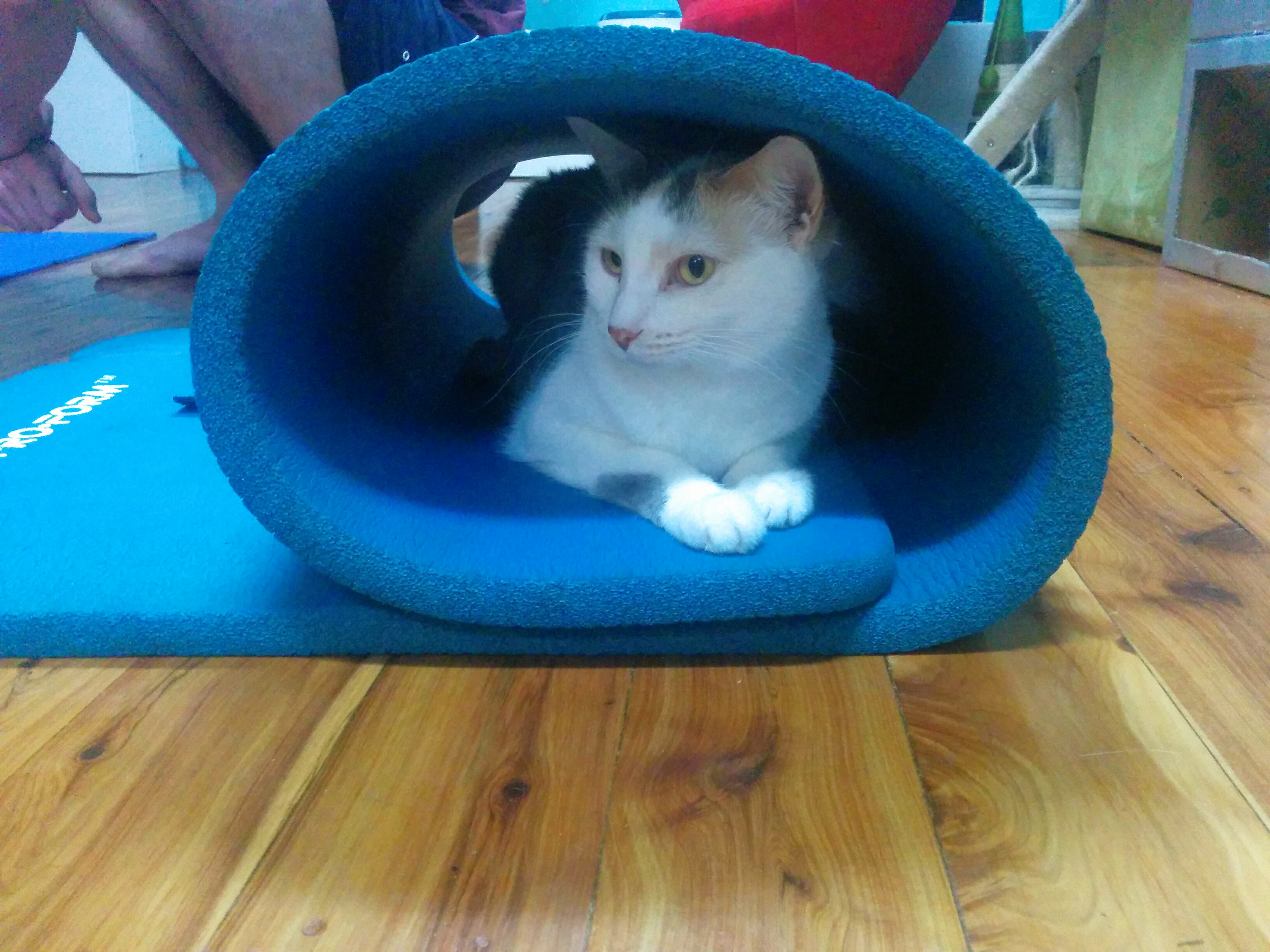 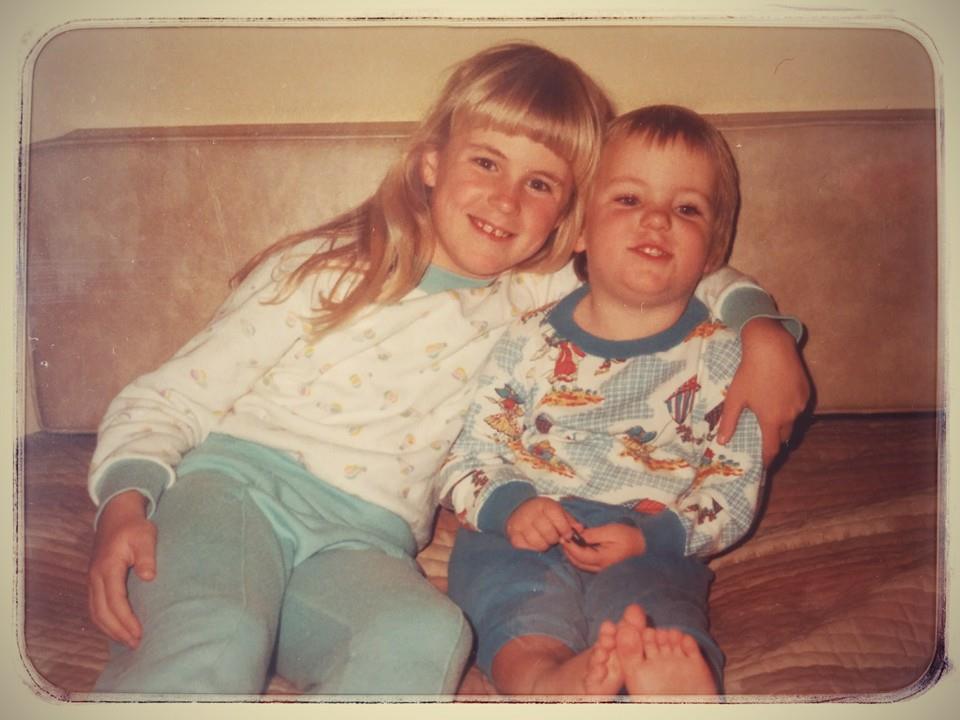 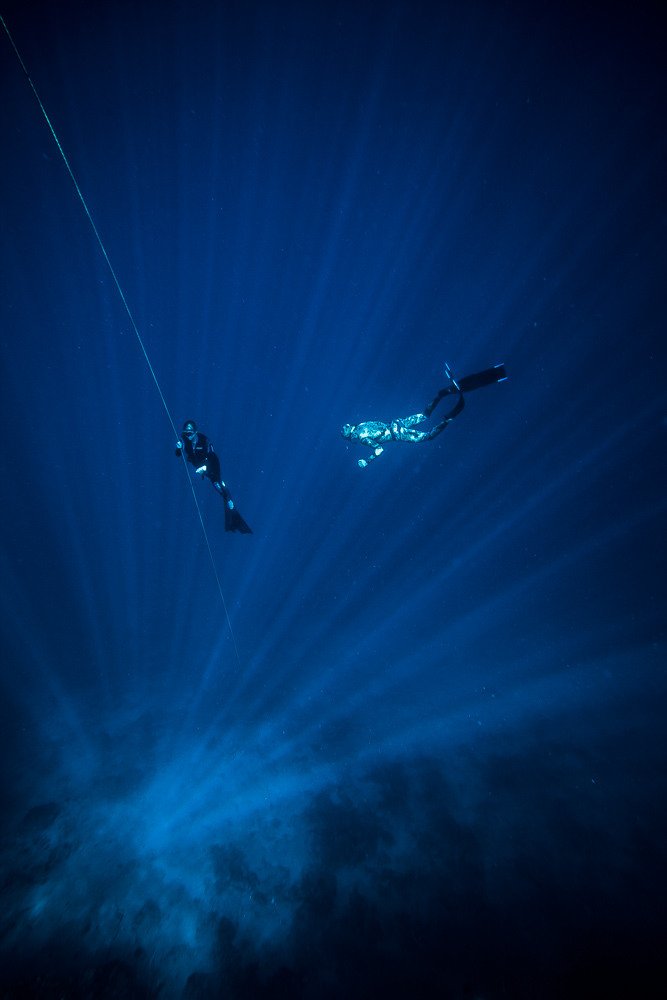