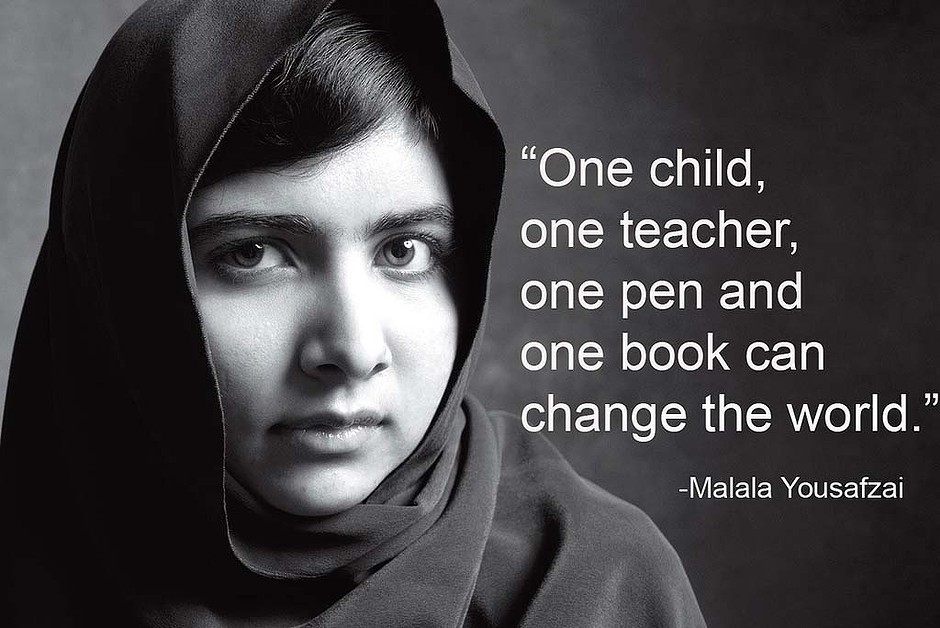 “Let us pick up our books and our pens.

They are our most powerful weapons”

I recently watched “He Named Me Malala” on route to Auckland. I see international flights as a chance to entrap Ginger Hunk, into a foray of planning about our future and life. He takes it the opposite way, stocking up on gadgets and headphones to drown me out. Anyway, on our recent flight to Auckland, I took the opportunity to put on the documentary about Malala Yousafazi and I was mesmerised.  I had heard about this brave girl, an activist for women and girls education in Pakistan, who was shot in the head riding to school in Swat Valley in 2012 and miraculously survived, but was so happy I learnt more.

The documentary starts with what was a pretty normal, and happy family life in Pakistan. Growing up in the once beautiful Swat Valley, Malala was born the eldest of two younger brothers, and named after Malalai Mawand, a warrior of Afghanistan. Her father Ziauddin, an activist and teacher, ran a chain of schools in the area. At the age of 12, the BBC were looking for teenagers to blog secretly about the Taliban, and her father volunteered Malala. (This was indeed risky, most adults at this time were silent, but there was an overall feeling that surely the Taliban would not hurt a child.)

What the documentary also shows is the demise of Pakistan under the Taliban. What started out as a community welcoming the Taliban to Swat, ended in killings for everyone that betrayed them. The documentary highlights the fear that was experienced, and the total demise of infrastructure in Swat, which seemed like a such a beautiful place to grow up in. Schools and shops were bombed. People that were believed to disobey the Taliban had their names broadcast over a speaker and were taken away in the night.

Soon the Taliban declared that no girls were to go to school. Malala begun to speak out and campaign loudly for the right to education. She was shot in the head on 9 October 2012, two of her friends were injured. The family was extradited to the UK, where she has continued her recovery and attended school, finishing high school last year. I was absolutely impressed by the way this documentary not only told the story of Malala ‘the activist’, but also the story of a displaced family. Birmingham is not their home, and so they struggle to find their way in a new world, Malala struggles to fit in at school and her mother to learn the language, despite Malala’s ‘celebrity’.

But so, they go on, to campaign for women, children and girls education.

I finished watching the documentary and felt so lucky for my start in life.

I’ve been to school, high school, completed two university degrees that I could pay off later and many other courses, just for ‘fun’. This education has helped me,earn decent money, have a job to fall back on while following my passion, and work sponsored overseas. How lucky am I?

A person’s earning potential increases by 10 percent with each additional year of schooling.

Educated mothers are 50 percent more likely to immunise their children than mothers with no schooling.

How you can help

With it being back to school week, World Vision has a number of one-off gifts you can purchase from educational packages for Indigenous children, or a bicycle to help a girl get safely to school. Check it out here.

Be a champion for Girls’ Education, by visiting The Malala Fund.

Have a great back to school week!